This is the moment you’ve been waiting for: GFI’s global reports on the current state of cultivated, fermentation-enabled, and plant-based proteins are now available.

Let’s take a quick look at some of the many big-picture takeaways from across the alt protein sector:

A Flood of Alt Seafood in Asia 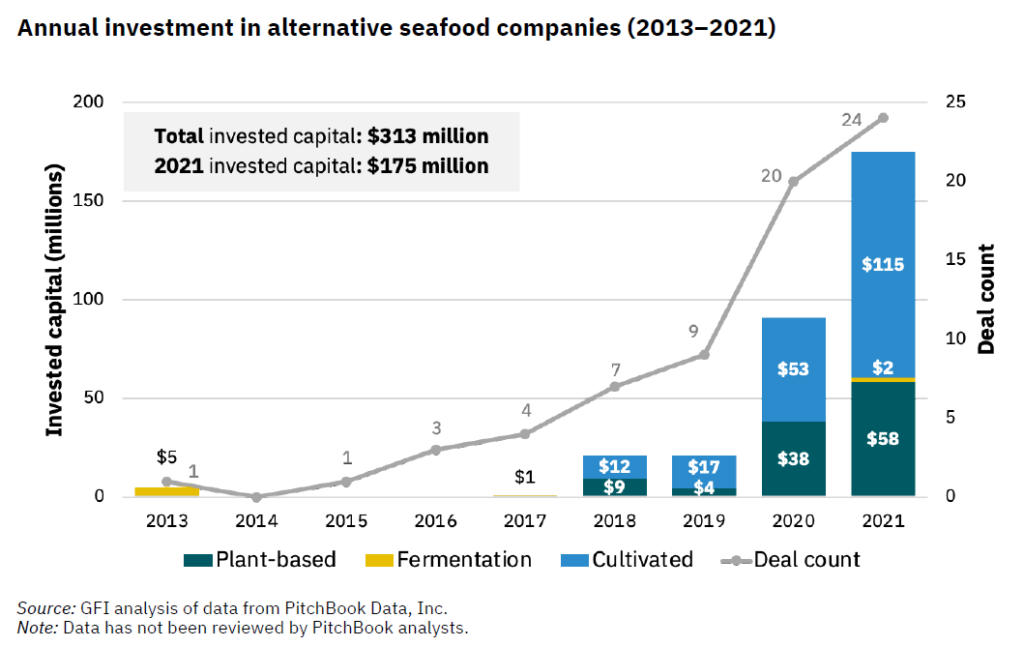 Asian markets play a central role in this shift. Of the top ten countries that eat the most fish, seven of them are in Asia, which startups and investors alike believe creates a market opportunity of epic proportions.

To capitalize on this moment, startups and legacy brands in APAC made many major moves over the last year:

All of that—and much more!—took place just within 2021, further cementing alt seafood as the market segment to watch in Asia.

Until recently, the vast majority of plant-based products relied on proteins from commodity crops, such as soy, wheat, or pea—crops that historically have not been optimized for protein content and functionality. But now, a growing number of startups in Asia and beyond are exploring the vast range of locally produced and underutilized crops, and reimagining them as novel protein sources.

Aquatic crops such as seaweed, microalgae, and duckweed have become an especially hot area for exploration, owing to their sustainable cultivation, high protein content, strong protein functionality, and nutrient content.

Southeast Asian researchers have also been on the cutting edge of efforts to upcycle high-value food byproducts for alt protein applications, with figures like Prof. William Chen at Nanyang Technological University in Singapore developing innovative and cost-effective products from raw ingredients that would have otherwise gone to waste.

Hybrids on the Horizon

If there is any one theme that is consistent across all of GFI’s latest State of the Industry reports, it’s that alt protein categories—once siloed and operating independently—are increasingly intertwined.

Several products are now on the market that combine ingredients from across multiple alternative protein production platforms. An early example of this is the Impossible burger. Impossible Foods incorporates soy leghemoglobin produced via precision fermentation into their plant-based burger to give the finished product a meatier taste and appearance.

But that’s just the beginning. GFI’s global experts believe that the first wave of cross-cutting products and partnerships will likely be eclipsed by a whole new generation of high-fidelity hybrid products in 2022.

We use cookies on our website to give you the most relevant experience by remembering your preferences and repeat visits. By clicking “Accept”, you consent to the use of ALL the cookies. However you may visit Cookie Settings to provide a controlled consent.
Cookie settingsACCEPT
Manage consent

Performance cookies are used to understand and analyze the key performance indexes of the website which helps in delivering a better user experience for the visitors.

Analytical cookies are used to understand how visitors interact with the website. These cookies help provide information on metrics the number of visitors, bounce rate, traffic source, etc.

Advertisement cookies are used to provide visitors with relevant ads and marketing campaigns. These cookies track visitors across websites and collect information to provide customized ads.

Other uncategorized cookies are those that are being analyzed and have not been classified into a category as yet.